The story of what becomes of a puppet who outgrows his puppeteer.

Once a great duo in the late vaudevillian era, Budward and Louis, came upon hard times with the advent of the talkies. With crowds drawn away from the live theater to fill the nickel seats at the matinee the only way to make ends meet was too perform on the street in front of the nickelodeon. It was there that they were discovered, well Budward was discovered, Louis was deemed to old for the screen, Budward stood by his old partner, though, and brokered a deal that Louis would always have a bit part in any movie he did. Going on to play beside Greta Garbo and Betty Davis, Budward soared to fame, while Louis literally became a piece of scenery in the background. Then in 1943 scandal rocked their career as tabloids printed photos of Budward in bed with Louis’s wife. Forced to live with each other, bitter brawls ensued. Louis even attempted to saw off his own arm once, while Budward slept, but passed out from pain and Budward luckily woke up in time to call 911 to save his life. Now once again beggars living on the street, Dead Weight, picks up the story of their final audition to make it once again into the limelight. 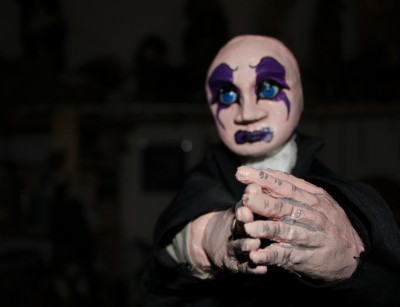